Where can you go and find the brightest minds in the Solar industry? On August 6-12, 2005, the 2005 Solar World Congress comes to Orlando, FL.

Join the American Solar Energy Society, the International Solar Energy Society and all of the other participating organizations in Orlando, Florida, the second week of August, as we welcome the ISES Solar World Congress back to the United States. Join leading researchers, scientist, engineers, architects, designers and other renewable energy professionals from around the world at this comprehensive program.

Highlights of the expo include Bringing Water to the World and the History of Solar Energy and ISES.

In addition, the expo brings the Renewable Energy Products and Services Exhibit, pre and post workshops and tours.

It’s appropriate to hold this special gathering in the heart of the “Sunshine State.” Florida is the home to a thriving solar industry, two nationally renowned solar energy research centers and hundreds of thousands of residents who use solar water heating, pool heating and photovoltaic technologies in their homes and businesses.

We hope you will join us as we look back at the accomplishments of the past half-century and look ahead to the next 50 years, with a special focus on the challenges of water in our future. 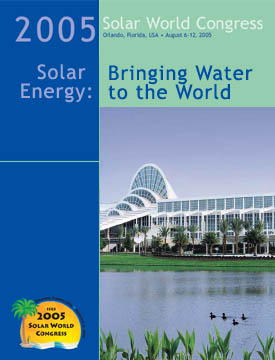 The world history of energy use and technology is essentially the history of solar energy in all its renewable energy forms. These forms, for millennia, we can describe as direct and diffuse solar radiation and its indirect forms of wind energy, hydro, photosynthesis. In its fossil or geologic forms (only for 200 years, coal, oil, gas) and of the other forms of energy (nuclear, geothermal, tides), all relate to solar origins.

After 50 years, ISES proposes the History Session on the occasion of its 50th Anniversary to review the use of solar energy in all its renewable forms (direct solar energy, biomass, wind and water power) in the past in order to understand its role for the future.