The growing costs of U.S. dependence on oil have hit home. Factor in world insecurity, economic instability, and it’s clear we pay a lot more to fill up our cars than the price on the pump. And with the threat of global warming, it’s clear we need to use much less oil. How can we start to change? The century-old gasoline-powered engine is on its way out. Auto makers say the answer will someday be fuel cell cars. Maybe, but we need to get affordable cars now that use far less gas with lower greenhouse gas emissions.

A first step is already on our roads. Hybrid cars add an electric motor to a gas-powered engine to improve efficiency at slow speeds and rev up when needed. The popularity of the first hybrids caught auto makers by surprise. Yet as they scramble to catch up, they’re missing the big opportunity to leapfrog to next-generation hybrids.

The Benefits of Plug-In Hybrids
Prius, Civic, Escape, Accord, and other hybrids coming soon are a great improvement. But why stop there?

The California Cars Initiative is a Palo Alto-based nonprofit startup. We’re a group of entrepreneurs, engineers, environmentalists and others promoting high-efficiency, low-emission cars and harnessing buyer demand to help commercialize advanced technologies. Somewhat uniquely, we focus both on public policy and technology development. Formed in 2002, our efforts for “100+MPG hybrids” began to be noticed in early 2005 when we were covered in The New York Times, Business Week, TIME, Newsweek, National Public Radio, Los Angeles Times.

CalCars, Gas-Optional or Plug-In Hybrids
We’re demonstrating the immediate opportunity and benefits of “gas-optional or plug-in” hybrids (GO-hybrids or PHEVs). The next generation of hybrid cars can be based entirely on existing components. They’re basically like current hybrids, but with larger batteries and the ability to re-charge conveniently, so local travel is electric, yet the vehicle has unlimited range. While hybrids may cut gasoline use by one-third, PHEVS can cut out another third. We see it as the future pathway to multi-fuel and biofuel PHEVs — cars that get 500 MPG of gasoline that people are talking about. For advocates of fuel cells, PHEVs make hydrogen cars more affordable by reducing the size of the fuel cell stack and the amount of hydrogen stored.

We began with a prototype conversion we call PRIUS+ to bring attention to plug-in hybrids and encourage car makers to build them. We “green-tuned” a stock 2004 Prius by adding batteries and grid-charging. (We replaced the battery control system but didn’t modify the hybrid controls.) Our proof-of-concept car used lead-acid batteries. We document our effort at our open-source-style technology discussion group here. 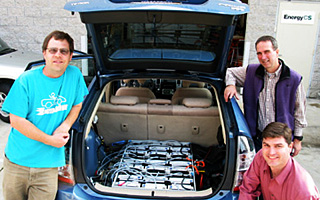 EDrive Systems, a for-profit integration company in Southern California, installed even better lithium packs to get 100+MPG (plus costs of electric power). EDrive intends to begin selling PRIUS+-style retrofits in early 2006, with a goal of pricing conversions at $10-$12,000. On May 2 we explained how our efforts intersect. Click here to view their Frequently Asked Questions. And see the CalCars Frequently Asked Questions.

We’re also involved in advocacy and public policy, bringing together the growing attention given to this “up-and-coming” technology. We’re educating the large market of car buyers who will pay extra for all the benefits to them and society of better cars. We’re presenting PHEVs, along with wind and solar power, as a coordinated response to two of today’s greatest challenges: global warming and energy security.

Our goal is to persuade Toyota and other automakers to build PHEVs for a market we expect to expand as the Kyoto Protocols and parallel state and international greenhouse gas initiatives are phased in. We’re exploring with public officials ways to provide incentives to auto makers to build GO-hybrids– including the just-announced Plug-In Austin local and national initiative. We’re demonstrating demand initially from early adopter individuals and institutions.

Working with other PHEV advocates, we’re developing innovative ways to meet expected demand from utility, government and corporate fleets for substantial numbers of vehicles before a car company delivers production PHEVs. To take advantage of that who-knows-how-long window of opportunity, we’re exploring ways for a California company to partner as a Qualified Vehicle Modifier (QVM) with an automaker to design, assemble and sell PHEVs (at a price several thousand dollars higher than conventional hybrids, which would provide a lower lifetime cost of ownership than any other vehicle type). Conversion possibilities include the Ford Escape hybrid, all cars that use Toyota’s “Hybrid Synergy Drive” (Prius, Lexus, Highlander, Nissan), as well as other forthcoming hybrids.

We’re a mostly-volunteer effort. We’ve gotten contributions from, among others, a well-known entrepreneur and a major foundation, with others to come. We accept contributions and offer a unique bumper sticker to Charter Sponsors.

Founder Felix Kramer says, “I’m a startup person and environmentalist going way back. My personal motivation evolved from general environmental and clean air goals to seeing PHEVs as a keystone component of a strategy to address global warming both nationally and internationally.”

“I envision millions of PHEVs, charged from off-peak electricity from a modernized grid and from distributed photovoltaic and wind power, with the range extension engine powered by zero-carbon cellulose ethanol, as a way to significantly reduce the more than 30% of greenhouse gases that come from transportation.”