Oh, What A Feeling

It sure feels good to be green. Hybrids are a much needed step in the right direction. I’m still looking for a new car, and fuel economy is a big motivator for me. With Brevard’s 72 miles of coastline to traverse, gas guzzling monsters just aren’t right for me.

Have you noticed all the new hybrids on the road? Amid all the hype about employee discounts, sales and holiday specials, several automakers are deploying a whole fleet of hybrids. And I’m seeing them pop up in the least expected places.

From my perspective, you’d think that fuel economy would be foremost on people’s minds, with gas hitting $3 a gallon, but that’s just not the case. Most new hybrids do bump up their miles per gallon, but the industry is delivering performance as their main selling point.

Do you have to sacrifice driving fun to be green? Perhaps its lessons learned during the fuel crisis of the 70’s, where anemic performance of many diesels gave them a bad name. Maybe it’s the American buying public that demands speed and quarter-mile times so that I can beat you to the next red light. To combat that hemi under the hood, most car companies are stressing that hybrids do not equate to wimpy driving.

I recently went to Toyota / Lexus of Melbourne and asked to drive some of the newest SUV hybrids, and both the Toyota Highlander and Lexus 400h (RX Hybrid) are anything buy wimpy. Since I drove both, and their prices are very close, it’s fair to go head to head.

Toyota is definitely leading the way with their hybrid technology. The Prius has shattered all sales expectations. They can’t keep them in stock and are struggling to meet demand. I think we’ll see their entire fleet adopt the technology. But you don’t have to trade in performance, you can still load up the soccer team or girl scout cookie crew, and feel good about it.

The Highlander is a great platform to green up. They are fun to drive and perfectly suit those who are too cool for a minivan. The hybrids get their mileage to an acceptable level, whereas the regular model is at the bottom of Toyota’s lineup in terms of mpg. If you are in the market for a Highlander, than I’d definitely stress the Hybrid. 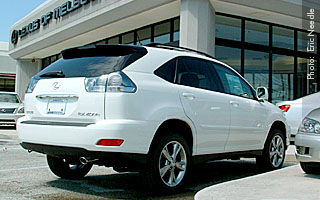 I took this one over the causeway in Melbourne, she powered through, making my CR-V seem like it’s pedal powered. The Lexus was even more impressive. For those of you not familiar, the causeway is a burly bridge that crosses the Indian River before you get beachside; just about the only way to test hills in our flatlander state.

For driveability, both are very nice. I’m used to the format, and visibility and ease of use is top notch. The Lexus loses a bit of visibility, but that’s about the only place it suffers. It feels armored and insulated, just ad you’d expect, but both had great feel for the road. Inside, both are nice, again the Lexus really shines. I certainly felt superior to all other mere mortals on the road. A fine ride.

With price coming so close… for me, the RX Hybrid is the clear winner. Oh what a feeling.
Get a hybrid, conserve fuel.

Special thanks to Toyota Scion Lexus of Melbourne for letting us take these vehicles out for a spin. Sorry for the mud. 🙂

Contact Celeste (The nice lady in the office) or Alan (the sales guy) for info and details at (321) 254-8888 or visit their site at www.toyotaofmelbourne.com

Their dealerships are located on US1 in Melbourne, just North of 192.