I am ready to buy a new car. With the emerging crop of hybrids out there, I’m eager to leave a smaller footprint, use less gas and leave less smog behind. The first step, as with this article, is research!

At the Green Building Expo in Pittsburgh, I sat in a red Toyota Prius. I have to say that it is a cool vehicle. They’re taking the hybrid concept and trying to mainstream it. The result is a car that is quite roomy with quirky, neat styling. My favorite feature was the on button… just like on your PC.

The Prius meets the Super Ultra Low Emission Vehicle (SULEV) standards. It reports 60 mpg in the city and 51 on the highway–although there’s a lot of grumbling going on over how EPA comes up with its mileage numbers, and many owners are reporting poorer mpg than what’s on the sticker. Still, it posts respectable numbers relative to what else is in the market. 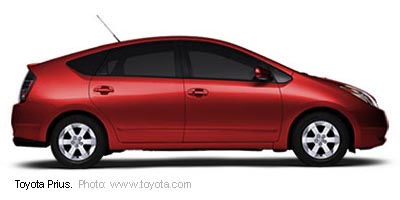 The Prius has great pickup from a stop, as do all of the electric motors on the market. Its been getting rave reviews and is arguably the best real entry into the consumer market. I see several of them on the road and they look great. Both Toyota and Honda deserve praise for offering hybrids, with Ford entering the fray with its 2005 Escape mini-SUV.

Next I looked at the Honda Civic Hybrid. Great mileage on the same platform as the other Civics. Economy of scale is a wonderful thing. And all Civics are ULEV (not just the hybrid); the manual hybrid is AT-PZEV. Economy and emissions are excellent.

Honda’s Accord Hybrid Sedan has just hit the shelves. As I review the stats, though, I have to wonder why the performance is so strong at the expense of mileage. A 255hp V-6 offering just 30mpg city 37 highway seems so close to revolutionary.

Other automakers are focusing on entry level models that treat Mother Earth a bit kinder. Scion’s xA and xB both hit 31 mpg at worst. Both VW and BMW are producing excellent low emissions and are seen as very earth-friendly cars, but didn’t VW Rabbits (diesel) of the 1970s get 50 mpg? Isn’t even 30 a sad statement, considering the oil prices and production levels we’re seeing right now?

Last, we come to the stumbling block that most car buyers, or shoppers hit, and that’s the price. As you start to work out the numbers, the hybrids get edged out. Honda’s un-hybrid Civic still offers great economy, lower than most emissions, and deals are widely available. At the end of the day, cost of ownership and fuel makes the hybrid more expensive to own…but as the price of oil rises, it’s a matter of time before things equalize.

Now please don’t get me wrong. It is miraculous that several automakers are producing engines that vary an inch from the norm. Honda and Toyota both deserve kudos for their efforts. Yet from an economic standpoint, I have to ask if it makes sense; is this just an exercise? Sure, those who are committed to greening America might not blink at the extra 2-3k, but is that mainstream? For the market, asking a consumer to pony up the $21k it takes to drive one of these miracles of modern technology possibly stretches it too far, especially with the industry selling us performance over environment.

I’m not disappointed in the propeller heads at the automakers, just the bean counters. I know that if I invested the type of R&D that Honda did, I’d look for return; but to me, this shows that it’s still just a test, a tease to see how many early-adopters might give it a go.

As I was searching I found several great sites that help consumers evaluate how friendly or mean a model is to the environment. The EPA has their green vehicle guide. To see how green your car is, (or isn’t), visit GreenerCars.com, which reports on the industry and rates models by category. Another useful site is the Clean Car Campaign, which urges grassroots action targeting the auto manufacturers. Go sign up.

All in all, a Civic LX offers great mileage, low emissions and is a market leader. I just can’t help but wonder when we’ll see companies and consumers totally commit to reality, giving us fun cars that lower our gas consumption. Given the times, do you really need a 350hp HEMI to get you back and forth to the office?