The State of Florida is taking big, first steps in the direction of Hydrogen to fuel our transportation needs. Last month we mentioned two amazing news articles that signal the start of something wonderful. Imagine a world where we rarely use gas or an internal combustion engine. With concerns over global warming, climate change and pollution, the use of Hydrogen over oil is 25 years late… but is certainly welcomed.

Hydrogen is the most abundant element in the universe. That’s a serious statement. Using it to power America – and the world’s ever growing demand for energy has been a dream of science for years, and one of the first real solutions to hit the mass market. But will it ever get here, or is it just some pie in the sky idea?

What’s all the hooplah? With a Hydrogen powered car, the only thing thats comes out the exhaust pipe, is water vapor. Being so plentiful, Hydrogen can be turned into a fuel, and it doesn’t have to come form the mideast, doesn’t have to be drilled for in the Florida Keys or in the Alaskan Denali Perserve. And our state, is going to lead the way.

I found this report at DEP, Florida’s Department of Environmental Protection, and wanted to share it with you. Read on! 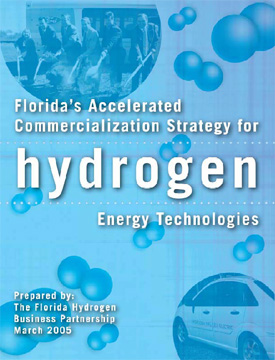 The Florida Hydrogen Business Partnership convened in Tallahassee to release the finalized strategy for hydrogen business development in the State, recommending public-private partnerships, a streamlined siting process, tax incentives and a diverse portfolio of demonstration projects.

DEP first gathered hydrogen technology developers, fuel and power producers and major energy consumers in April 2004 to assist the State with the development of Florida’s hydrogen economy. The Partnership’s strategy for industry and government to rapidly accelerate the development, demonstration and commercialization of hydrogen technologies will establish Florida as a major center for this revolutionary new industry.

The strategies outlined by the Partnership mirror the proposed Florida Hydrogen Energy Technologies Act, unveiled last month by Governor Bush at the groundbreaking of Florida’s first hydrogen energy station. The Partnership strategy and the legislation call for financial incentives, expanded demonstration projects and a uniform siting standard for businesses who invest in hydrogen in Florida.

Many of the actions identified by the Partnership are already underway. 15 mobile and stationary hydrogen demonstration projects are already underway or in the development stage. Another 13 projects are in the planning stage. Florida has committed to purchasing eight of the world’s first commercially available hydrogen shuttle busses for visitor transit in the Orlando area.

“Hydrogen is a fuel of the future that will diversify our energy portfolio and lessen the nation’s dependence on foreign oil,” said Deputy Secretary Bedwell. “Florida’s leadership in developing hydrogen technology will protect the environment and bring new investment, companies and jobs to the state.”

Hydrogen power is no longer a figment of an environmentalist’s wildest imagination, and it’s only a matter of time before efficiencies in the technology are refined and mass adoption takes place.

Read more about the strategy
http://www.dep.state.fl.us/secretary/news/2005/03/files/hydrogen_bus_plan.pdf

Now you see what I do for fun… and here’s a great site, Green Car Congress, that shows how quickly municipalities are buying into H2 for their transportation needs. Visit http://www.greencarcongress.com/hsub2sub/index.html