To Build A Dream

Dr. King is an inspiration–and shows us how great America can become if we work together towards the common good. So much is in place to divide us. We need to build bridges–and there is a group working to build a monument in our nation’s capital that does so.

The mission of the Memorial Project, is to commemorate the life and work of Dr. Martin Luther King, Jr. by leading a collaborative funding, design, and construction process in the creation of a memorial to honor his national and international contributions to world peace through non-violent social change.

Dr. King championed a movement that draws fully from the deep well of America’s potential for freedom, opportunity, and justice. His vision of America is captured in his message of hope and possibility for a future anchored in dignity, sensitivity, and mutual respect; a message that challenges each of us to recognize that America’s true strength lies in its diversity of talents. The vision of a memorial in honor of Martin Luther King, Jr. is one that captures the essence of his message, a message in which he so eloquently affirms the commanding tenants of the American Dream — Freedom, Democracy and Opportunity for All; a noble quest that gained him the Nobel Peace Prize and one that continues to influence people and societies throughout the world. Upon reflection, we are reminded that Dr. King’s lifelong dedication to the idea of achieving human dignity through global relationships of well being has served to instill a broader and deeper sense of duty within each of us— a duty to be both responsible citizens and conscientious stewards of freedom and democracy. 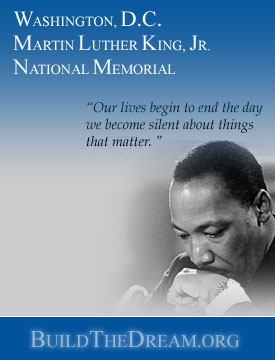 Why build a Memorial to Dr. King?
More than a monument to a great humanitarian, the National Memorial honoring Dr. Martin Luther King, Jr. will be a place for visitors from all over the world to be energized by its extraordinary power; the power that illuminated the faith of our founders and now impels us toward our destiny as a nation; the power flowing from the uniquely American spirit of brotherly love, freedom, justice, and the priceless blessing they endure…peace.

Why build the Memorial now?
Dr. King once reminded the nation of “the fierce urgency of now” while warning against “the tranquilizing drug of gradualism.” The time is now a historical perspective. Many young people have heard of Dr. King, but are unaware of the significance of his contributions to America and the world. The design has been established; the site is secured; the fundraising teams are already at work; and a portion of the $100 million campaign goal has been raised. The time is now.

What will the Memorial look like?
The Memorial is conceived as an engaging landscape experience to convey three fundamental and recurring themes throughout Dr. King’s life – democracy, justice, and hope. Natural elements such as the crescent-shaped-stone wall inscribed with excerpts of his sermons, and public addresses will serve as the living testaments of his vision of America. The centerpiece of the Memorial, the “Stone of Hope”, will feature a 30-foot likeness of Dr. King.

What can I do to help?
Individuals as well as corporations can add their financial support to this effort. Contributions, large and small, are needed to attain our goal of $100 million dollars. Spread the word to your friends, neighbors and acquaintances that they may make donations to this worthy cause.

Visit BuildTheDream.org today to find out more about this project, and become a part of making it happen.