Part of Webster’s definition of guilt includes the statement, “a feeling of shame or remorse due to personal responsibility, real or imagined, for an offense.” Does the responsibility pertain to a sense of inter-connectivity, to mankind, to community, to family or to home?

During a storm should you leave or should you stay? Am I safer “hunkered down” in a safe room or out of town? These were the questions prevalent in the mind of Brevardians and other Floridians during the wrath of ’04 during Charley, Florence, Ivan and Jeanne.

There are numerous ways to make a positive out of a negative situation. The reflection of a short story called “Boomerang Love” by Jimmy Buffet was the inspiration I needed to head to a refuge high above the flood zone of Florida to escape Frances. In the short story, a storm is threatening an area of the Alabama Gulf Coast in a fictional town called “Heatwave,” named to deliberately deter tourists and developers from stopping by. The characters are two former flames that have not seen each other in years, and are drawn together during the storm having a romantic candlelit dinner to make the best out of a nasty situation.

Cindy and I took off for the Smokies to a private mountain off of US 40 mile marker 18 west of Maggie Valley, North Carolina. With the words of Bob Dylan, “Come on, she said, I’ll give you shelter from the storm,” echoed in my mind we journeyed out and up. The majestic lodge style home built in the round looked outward to our most visited Park in the entire US, the Great Smoky Mountains National Park. From our vantage point you could clearly see the mist that named the park. The serenity of that panoramic view from the top was in great contrast to what was occurring back home. On the way out of town, listening to John Harper of WMEL AM 920 change tones from the lighter talk about how Winn Dixie used to be Kwik Chek–to the serious business of taking calls from highway rest stops offering refuge and routes out of town–was the first part of the reality of storm awareness and an alternate route out of Brevard.

The traffic in and out of town during storm evacuations has become a two sided question. The dangers of driving during a storm or its’ aftermath should be factored into the equation. Several days later, our hosts in the Mountains said you can’t possibly leave so early and yet the storm looked to be heading west and eventually right toward the area we were in. Atlanta had flooding. Asheville, only half and hour away from where we were, had a rock slide three days later. For several more days we heard about some excessive water damage in the northernmost states. Frances was slow, large and deliberate. In Williamsburg, Virginia, a week later while Ivan was pounding the gulf coast they told stories about the storm troubles they’ve had over the last several years. The wrath of hurricanes is far and wide.

While walking around the apple festival in Hendorsonville with perfect weather conditions it seemed almost surreal while the storm pounded Florida. I began to question my decision. How can I be here in this idyllic climate enjoying a festival while the world I know is in danger of destruction? What can I do besides stuff my face with delicacies from a distant mountain range area? Why did homes right next to each other suffer such a range of devastation next to some that were untouched? I decided not to ponder such profound questions and simply enjoy my fate but in the background everywhere was the storm coverage. The Weather Channel flashed a picture of the Fun Attic in disarray and announced that they were in Palm Bay. I knew Palm Bay was close enough, but the Fun Attic was actually on route 1 which I use almost daily and was even closer to my home near the Pineda Causeway. This was also almost surreal to watch while in a mountain wonderland.

The route that looked most safe to return to Brevard by was the eastern route since Frances was headed west. However, she was so big and slow that her aftermath welcomed us back into Florida with a nasty hail storm north of Jacksonville. This was the type of storm that you didn’t want to drive through. The type that made you think, maybe staying put is the right decision. And… during the even nastier Jeanne that’s what we did. 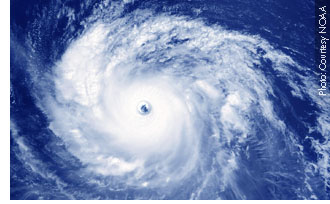 Neighbors helping neighbors is a wonderful thing. It seems, after all, that we are all somehow interconnected. During the worst part of Jeanne in the middle of the night when everything was blowing at a 90 degree angle, two little birds who appeared to be a couple were not even attempting to take any cover as they were watching the small backyard Lake as if it were the stage of a spectacular show. Indeed it was, the Mother Nature Review was as beautiful to watch as it was destructive to endure.

Most of us survived the wrath of ’04 but some didn’t. Cindy, whose home is in hard hit Sebastian is still waiting for a new roof. Others wait for a new home. Still others moved and plan to never return. I was reminded of the pictures from the futuristic designs of homes shown on www.thevenusproject.com.

The future sight described the following: “Homes could be prefabricated of a new type of pre-stressed, reinforced concrete with a flexible ceramic external coating that would be relatively maintenance free, fireproof, and impervious to the weather. Their thin shell construction can be mass-produced in a matter of hours. With this kind of construction, there would be minimal damage from earthquakes and hurricanes.” Pictures are available for viewing on their above referenced web sight.

We concluded that we’d like to see a class offered in basic storm preparation. Drilling and boarding for dummies is a book I’d like to tackle. We thought that growing up in Florida should perhaps have included a basic storm preparation class. If knowledge is the best defense than we need some more of it before next summer or the summers to follow in the months that could rattle Florida, the land of flowers, nature, danger and the beauty of the calm after the storm.

May you stay safe in front with the wind at your back and let’s survive and thrive in 2005.

Lee A. Rosenkranz, CTC is a second generation travel agent and International tour escort. He is a certified travel counselor, syndicated travel writer, travel course teacher, and radio talk show host. He currently works out of Palm Beach and Melbourne, Florida for Travel Greeters, a Visit USA inbound tour operation and the Dayaway Travel Club whose slogan is “if you’ve got a hobby we’ve got a tour”.

The web sight for Travel Greeters is www.travelgreeters.com and for the travel club it is www.dayawaytravelclub.com