Every day, thousands of individuals and families from every walk of life are taught how to become free from the bondage of debt, financial stress, and the effects of bad money decisions.

Crown Financial Ministries is a nonprofit organization that teaches God’s biblical principles of finances to people around the world. We teach through our award-winning radio programs, church-led small group programs, newsletter, and products, including workbooks and software.

Our mission is to equip people worldwide to learn, apply, and teach God’s financial principles so they may know Christ more intimately, be free to serve Him, and help fund the Great Commission.

We have trained volunteers who can help you set up a budget and get your finances in order. We offer materials for small group and individual Bible studies. We also have materials on many other areas of finances. We do not offer investing advice, nor do we have trained counselors who can give investing or financial planning advice.

Larry Burkett and Howard Dayton had been acquaintances for years and friends since the early 1990s. Concurrently, God had impressed both men with the need to expand into new areas for their respective ministries.

Howard had founded Crown Ministries on September 19, 1985. He recognized that Crown Ministries was doing an excellent job one church at a time with small study groups in many parts of the country and the world. However, he had a vision to reach millions, not thousands. Something was missing.

Larry had seen phenomenal growth in the outreach of Christian Financial Concepts since he founded it on May 6, 1976. Yet, the one area he wanted to impact with small study groups was the around the country and in many parts of the world. But something was missing. 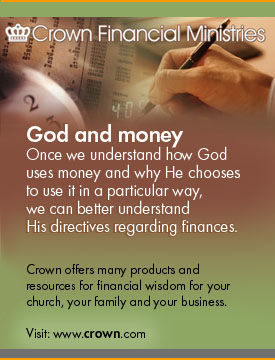 A Ministry Marriage Was Needed
Every once in a while a really good idea comes along, like ministries combining forces to do God’s work better. But then personalities and possessiveness get in the way and it usually falls apart. Not this time. This time the leaders listened to the Lord, and Christian Financial Concepts and Crown Ministries decided to get married. Of course, when Christian Financial Concepts and Crown Ministries decided to merge their strengths, respective know-how, and experience into one ministry, it was obvious that God must have been at work in the process. But, how did it happen?

Organizations often merge when a weaker one is taken over by another. However, why would two healthy ministries want to merge and thus lose their individual identities? It is rare for flourishing organizations that function well individually, and already serve hundreds of thousands of God’s people, to combine into a singular ministry. Almost simultaneously, God began a process of prompting both Howard Dayton and Larry Burkett with an uneasy sense that there was something more that their ministries should be doing. The same Scripture reference kept prompting both Larry and Howard to seek a better way: “Yet who knows whether you have come to the kingdom for such a time as this?” (Esther 4:14 NKJV)

After a radio interview, Larry felt led to ask Howard, “Why don’t we merge our organizations together?” This led to personal talks between Howard and Larry and, later, to serious discussions with the boards of directors of both ministries. After much study, discussion, and a lot of prayer, the boards of both Crown Ministries and CFC unanimously agreed to merge into a new organization, Crown Financial Ministries, on September 7, 2000.

Howard assumed the role of CEO, and Larry continued to do radio broadcasts and served as the chairman of the board until his home-going on July 4, 2003. The union of these two ministries created an alliance that will have a far-reaching impact on the church in America and around the world. In fact, Larry and Howard had a vision that will allow this marriage of ministries to reach and train more than 5 percent of the world’s population (some 300 million) over the next 15 years. If this goal is achieved, the efforts of Crown Financial Ministries will help to fund the Great Commission in a way never seen before.

Crown Ministries offers many products and resources for financial wisdom, for your church, your family and your buisiness.
For more information, contact or visit www.crown.org