The Power of Verse

I stumbled onto a site, looking for the lyrics of a Sixpence None the Richer song. Whenever it comes up in my iTunes shuffle, I sing along, whether I know the words or not. Since Puedo Escribir is in Espanol, even my abilities to butcher the real lyrics were hard pressed to make sense of it. What is this haunting melody singing about? An epic story of love lost, words of praise or teen angst amid a storm of grief.

The first website I found indeed gave me the lyrics. The words only alluded to something deeper.

My first sense of losing someone precious seemed to transcend the language. It’s amazing when music can touch your soul. So often, the arts add depth and emotion, meaning to our lives. Sometime it just takes a little digging to notice it, or at least consciously recognize.

Clicking a few more sites brought me to a poem of the same title, by Pablo Neruda. The Spanish is lyrical in itself, alas the meaning eluded me.

A little more digging and I finally find the poem translated into English. And despite the process of trying to convey emotion from one language to another, this version speaks volumes.

Tonight I Can Write by Pablo Neruda, translated by W.S. Merwin

Tonight I can write the saddest lines.

Write, for example, ‘The night is starry
and the stars are blue and shiver in the distance.’

The night wind revolves in the sky and sings.

Tonight I can write the saddest lines.
I loved her, and sometimes she loved me too.

To see the poem in its entirely, you’ll need to visit this site.
www.favoritepoem.org 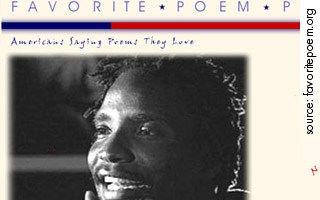 Favorite Poems is a project that works to build readership of poetry and bring together communities through public readings. The site tells us…

During the one-year open call for submissions, 18,000 Americans wrote to the project volunteering to share their favorite poems — Americans from ages 5 to 97, from every state, of diverse occupations, kinds of education and backgrounds. From those thousands of letters and emails, we’ve culled several enduring collections:

In addition to creating these collections, the Favorite Poem Project has been dedicated to strengthening communities through the art of poetry and has developed successful programs for libraries, communities and schools.

The project has inspired more hundreds of Favorite Poem readings in cities and towns across the country. These readings gather individuals from different corners of a single community to share their favorite poems with each other, revealing personal ties to specific poems. One of the pleasant surprises of the project has been how beneficial these readings seem to be for the communities that host them. If you are interested in organizing an event in your community, check out our tips.

Visit the site for some inspiration and get in touch and experience something just a bit off the beaten path.

Favorite Poem Project is created by a partnership among Boston University, the Library of Congress and other organizations, with major funding from the National Endowment for the Arts and the Carnegie Corporation of New York.

“Puedo Escribir” by Six Pence None the Richer 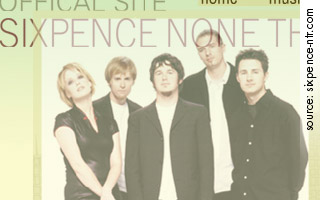 Sixpence None the Richer was (is) a Grammy-nominated pop/rock band with roots in New Braunfels, Texas, eventually settling in Nashville, Tennessee. They are named after a passage in writer C. S. Lewis’ Mere Christianity. (Source: Wikipedia)